Taking a Walk through a Computer

Coding Lab / Taking A Walk Through A Computer was an online coding lab meeting that took place on 19th May 2020. This lab explored computation through playing with things already present: Our bodies and our computer's terminals. We came together to learn the history and usage of the command language Bash and make ruly and unruly games with it on our computers. 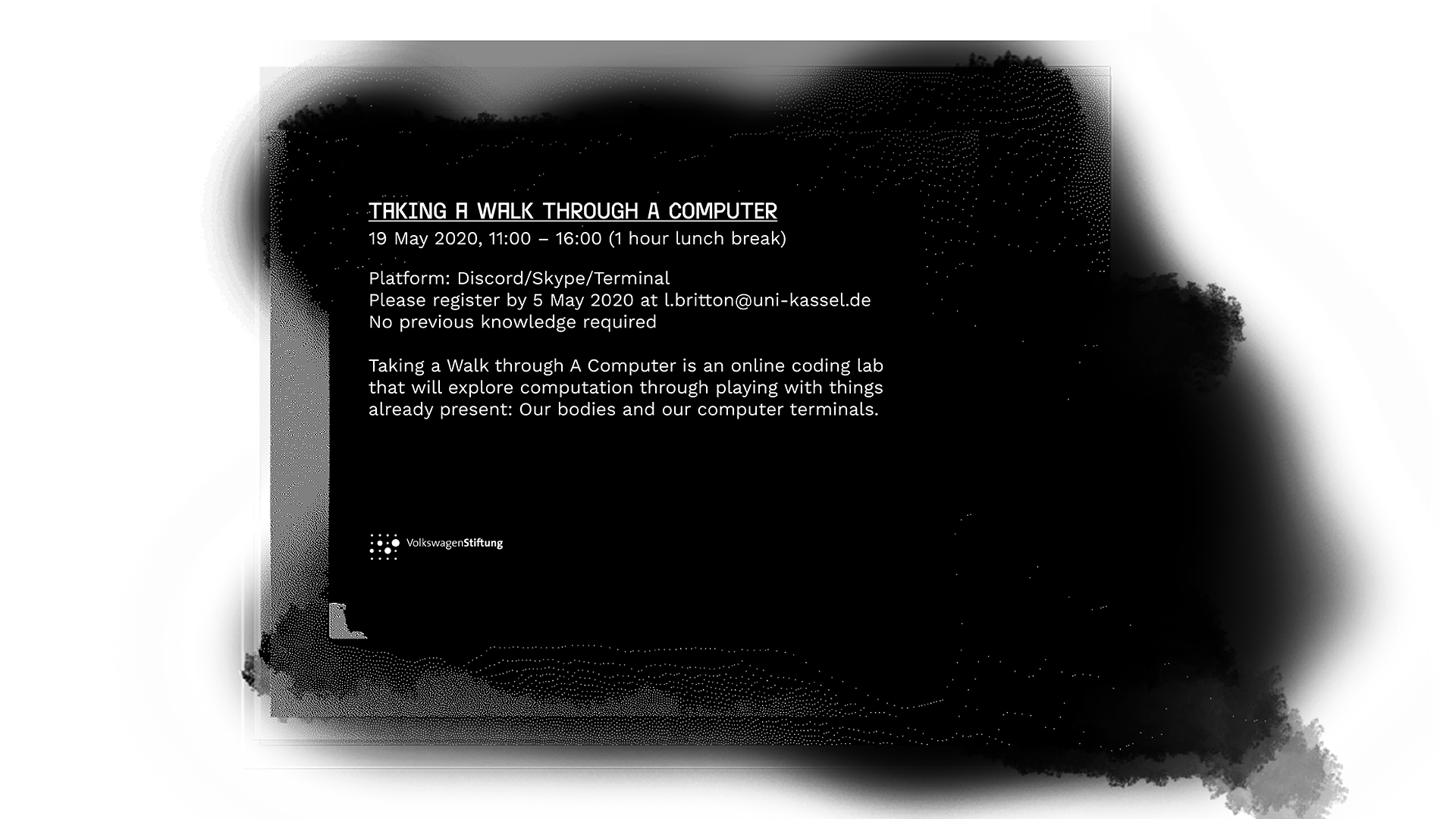 The lab itself was presented in two parts. First, we did an algorithmic walk: One of the lab makers had a piñata named “patriarchy” in her room space that participants could see through her webcam. In small teams the participants of the meeting had to algorithmically program steps for her to smash the patriarchy and for its insides to rain down. Thankfully, we were successful in doing so.

In the second part of the lab the paper snippets that had been hidden inside the piñata were read aloud to the group and connected to quotes that had been emailed to everyone. These quotes talked about computing, coding, play and storytelling. In the next part of the lab we split into small groups and picked up these themes in a Bash workshop that was led by the lab organizers. We used a shared online coding platform to “walk” through our computers using the programming language Bash. In this workshop, we played through the story of Shahmaran and the Evil Eye.

Shahmaran is a mythical creature, found with different variations in the folklore of Iran, Anatolia, Iraq, and of the Kurds. Half woman and half snake, she lives underground with the fear that humans will steal her healing powers. One day, when the injured human Tahmasp finds her in the underground, she reveals her secrets to him. After getting healed, Tahmasp leaves the underground with Shahmaran’s secrets and plans to capture her to steal her power. In the end, Tashmasp kills Shahmaran and turns blind instantly. However, as the goddess of healing, Shahmaran creates healing out of a “poison” since Tashmasp’s eye becomes a talisman known as “Evil Eye” which protects those who carry it on them against dark forces caused by jealousy and ill-intentions and, well, also against bad guys.

Here are some of the images of the code that was coded, the patriarchy that was smashed & the evil eyes to protect the participants after the lab: 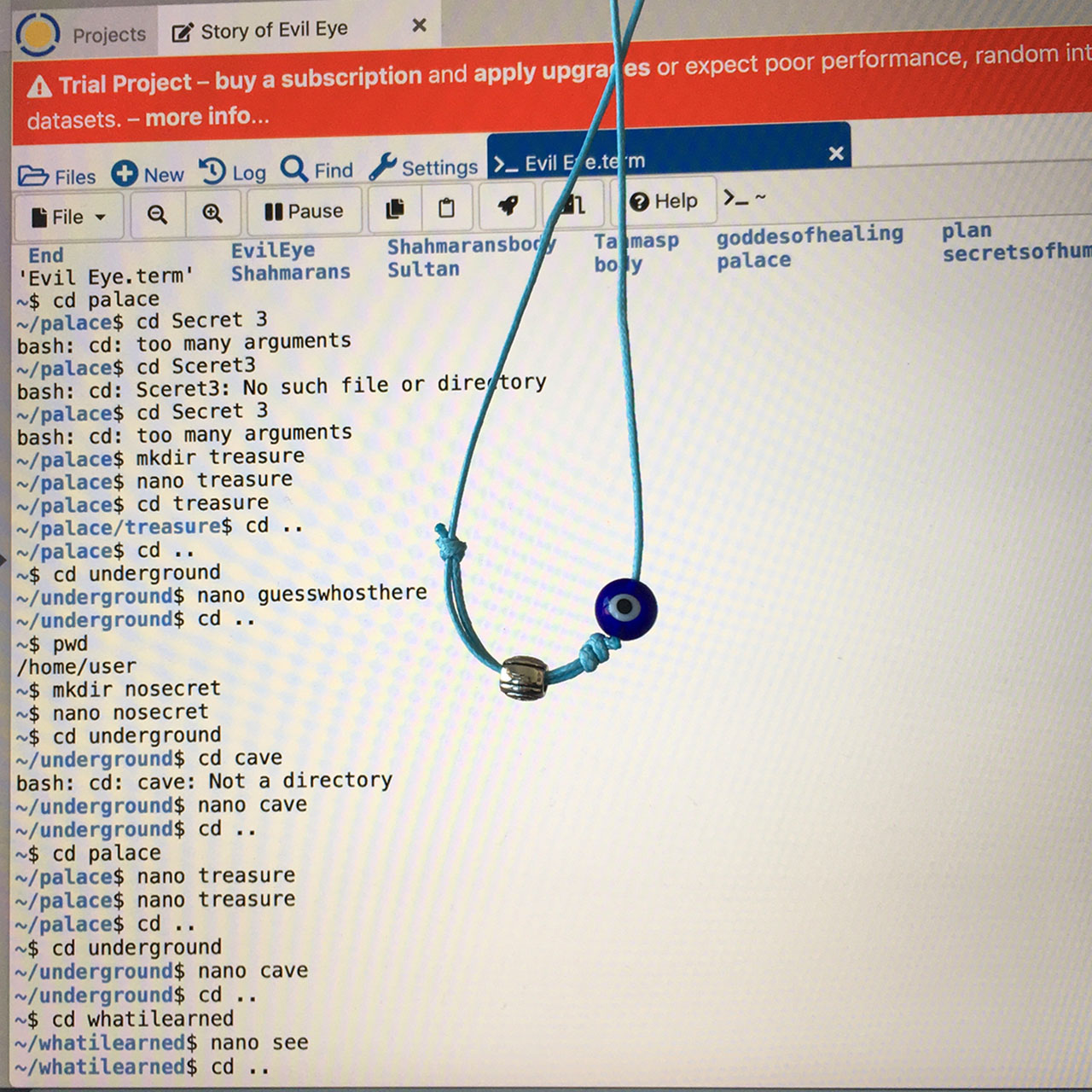 pwd: this command shows you where you are in the file system. it stands for ‚print working directory‘. very helpful for when you feel lost or want to confirm where you are located right now. 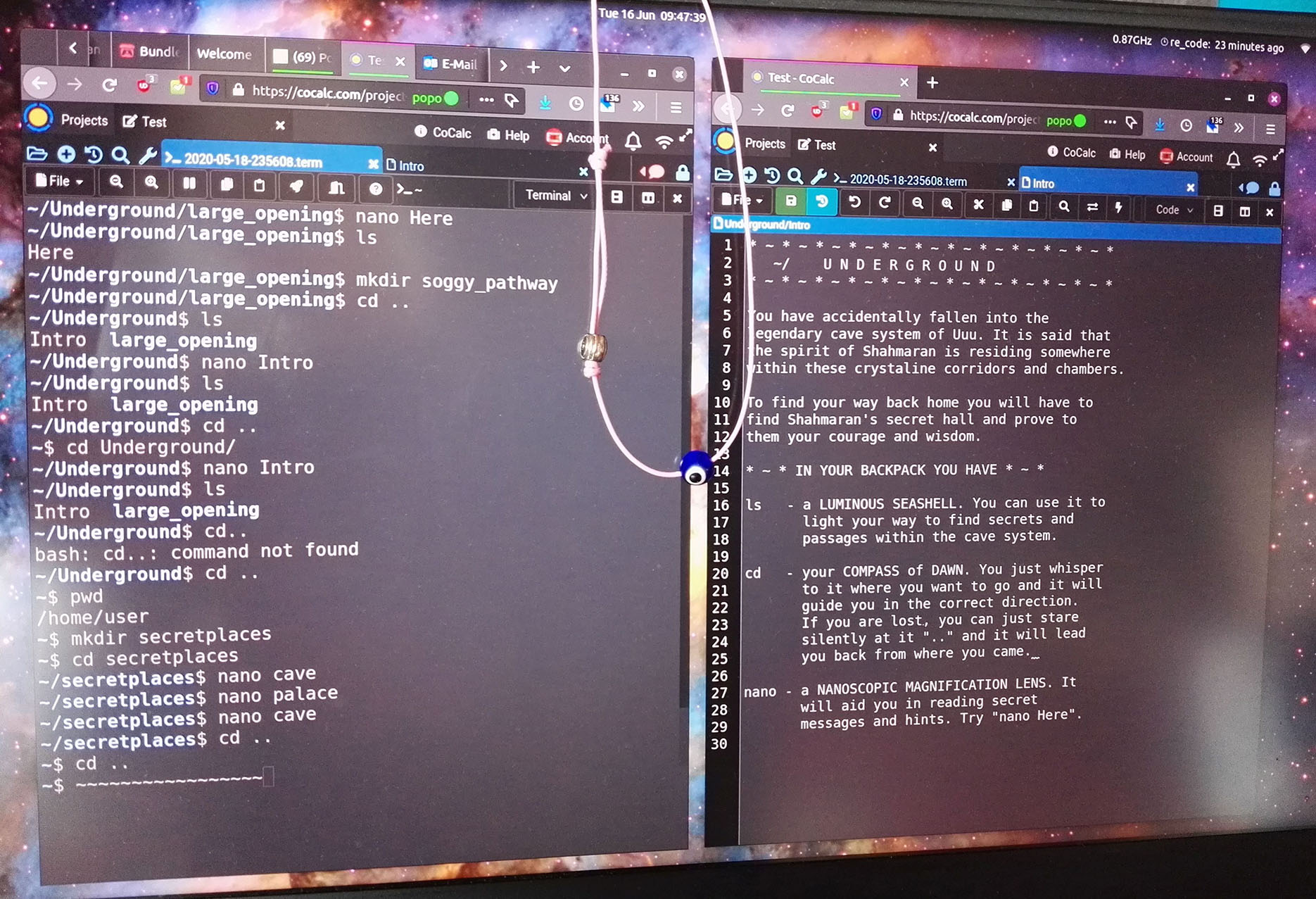 ls: to take a look around and see some friendly files, type ls. it will show you folders and files. if you are curious, you can try ls -la. This can show you some secret files that your Graphical User Interface doesn’t disclose to you automatically. 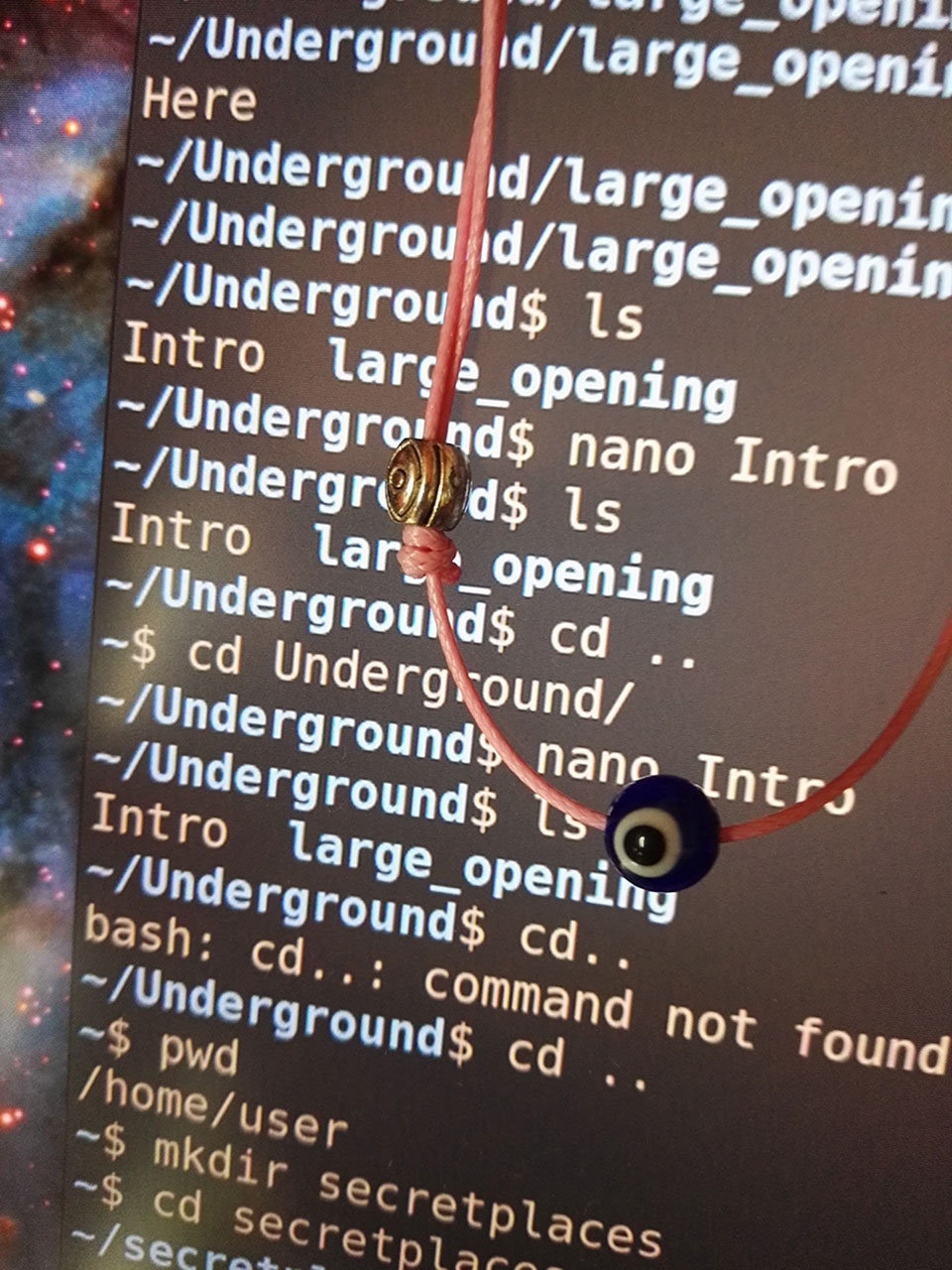 cd path: to go anywhere, back or forth, you’ll need to..? yes, change the directory - which is what the abbreviation cd means. Go forward by naming another existing folder, e. g. cd home. Go backwards by using two little dots: cd .. 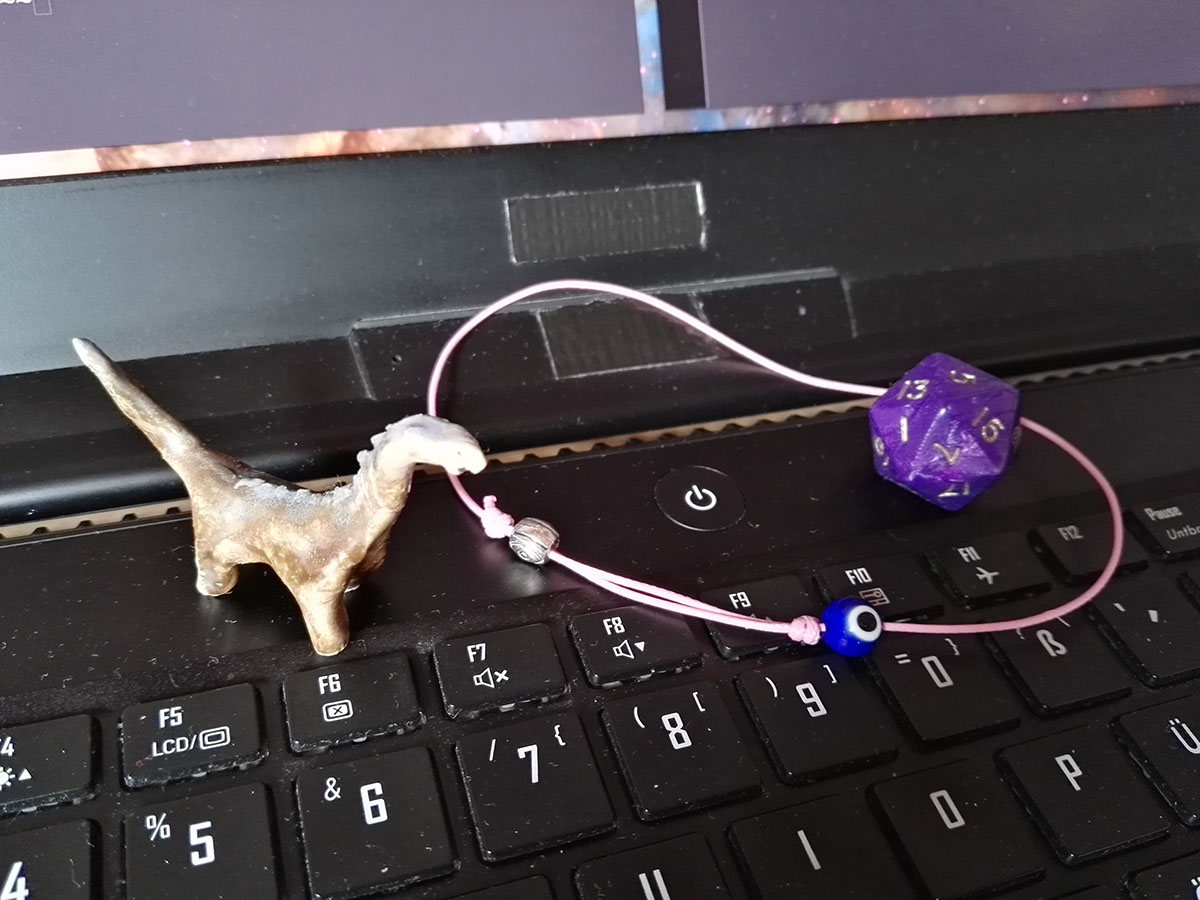 mkdir: write this command down and a nice name afterwards. this will create a new folder. how about typing mkdir chocolate. yay, chocolate folder.

nano: make a file. put in a secret. close the file by pressing the keys Ctrl X on your keyboard. Then, press Y to save your changes. Exit with Enter.