Playing the Code / Matters of Touch

Playing the Code / Matters of Touch was a game jam that took place in an online meeting space from the 14th to the 16th of September 2020. A game jam is a get-together with a set timeframe and sometimes a topic to think up and make a game around. 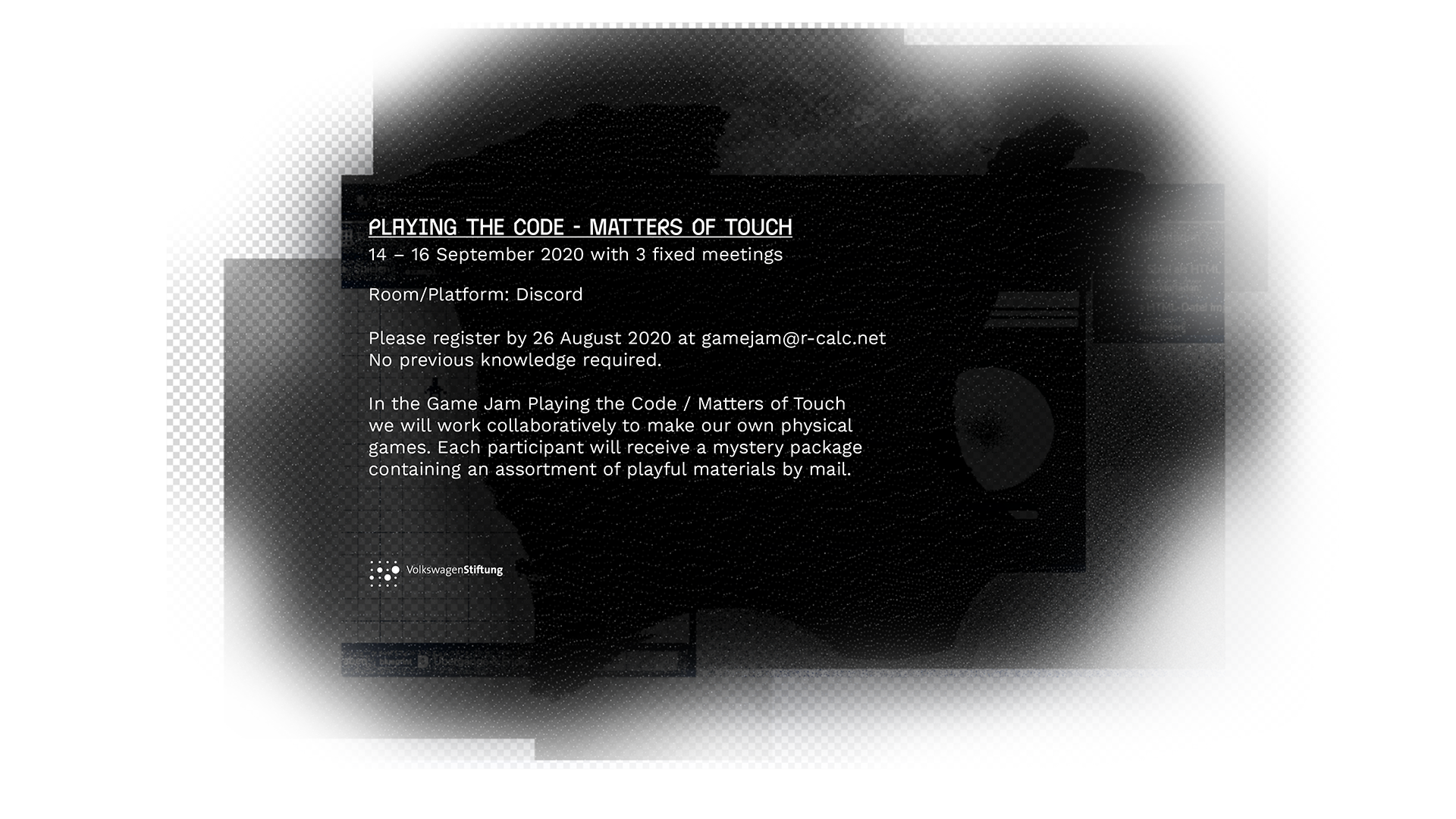 We worked collaboratively to make our own physical games by using an assortment of playful materials that were mailed to each participant’s home in a randomized package. As a meeting space we set up a discord server where we shared ideas, references and our work-in-progress. Our desire was to create a relaxed, communal space to experiment with materials, without the worry of "getting something finished" by the end. 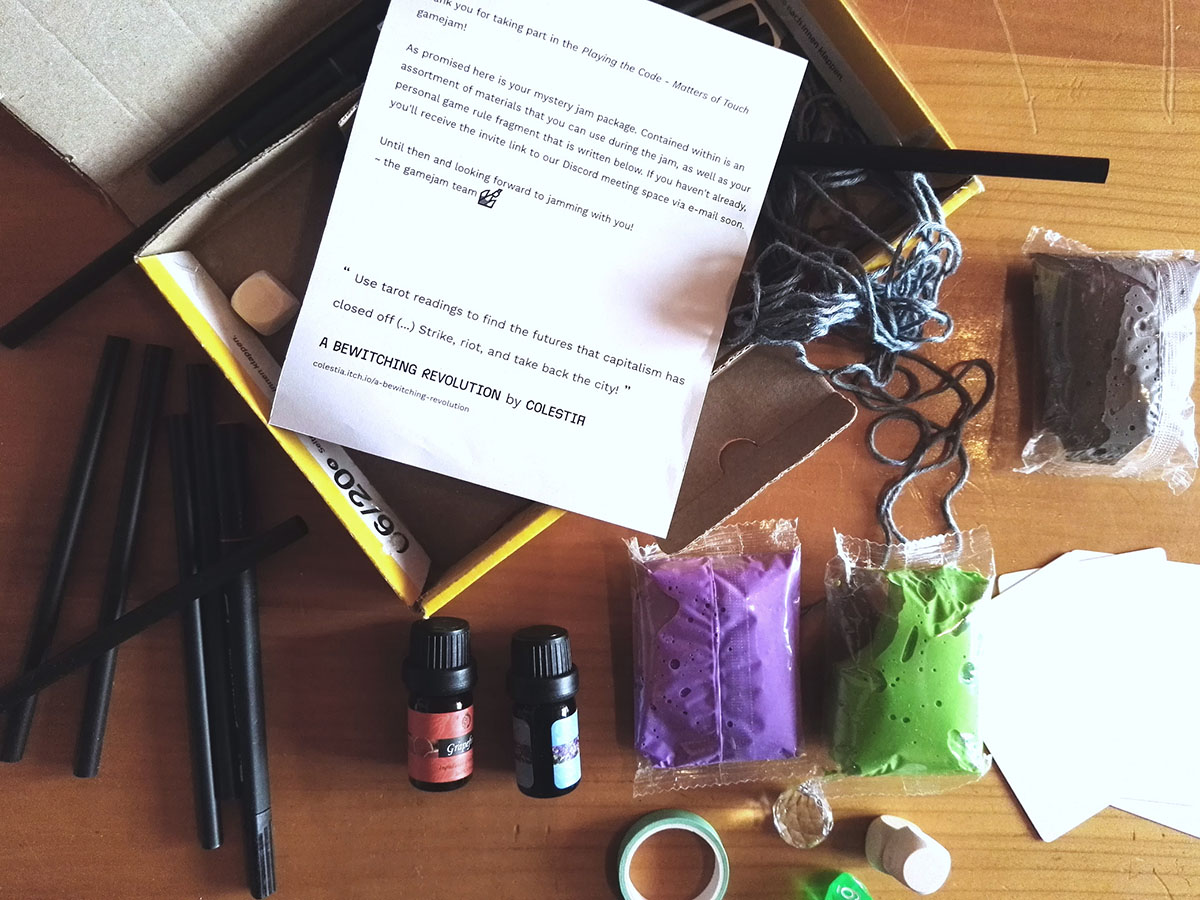 During the three days of the jam, we facilitated three meetups so that people could get to know one another. We also used this as a way of doing small collective exercises around game rules and playfulness. 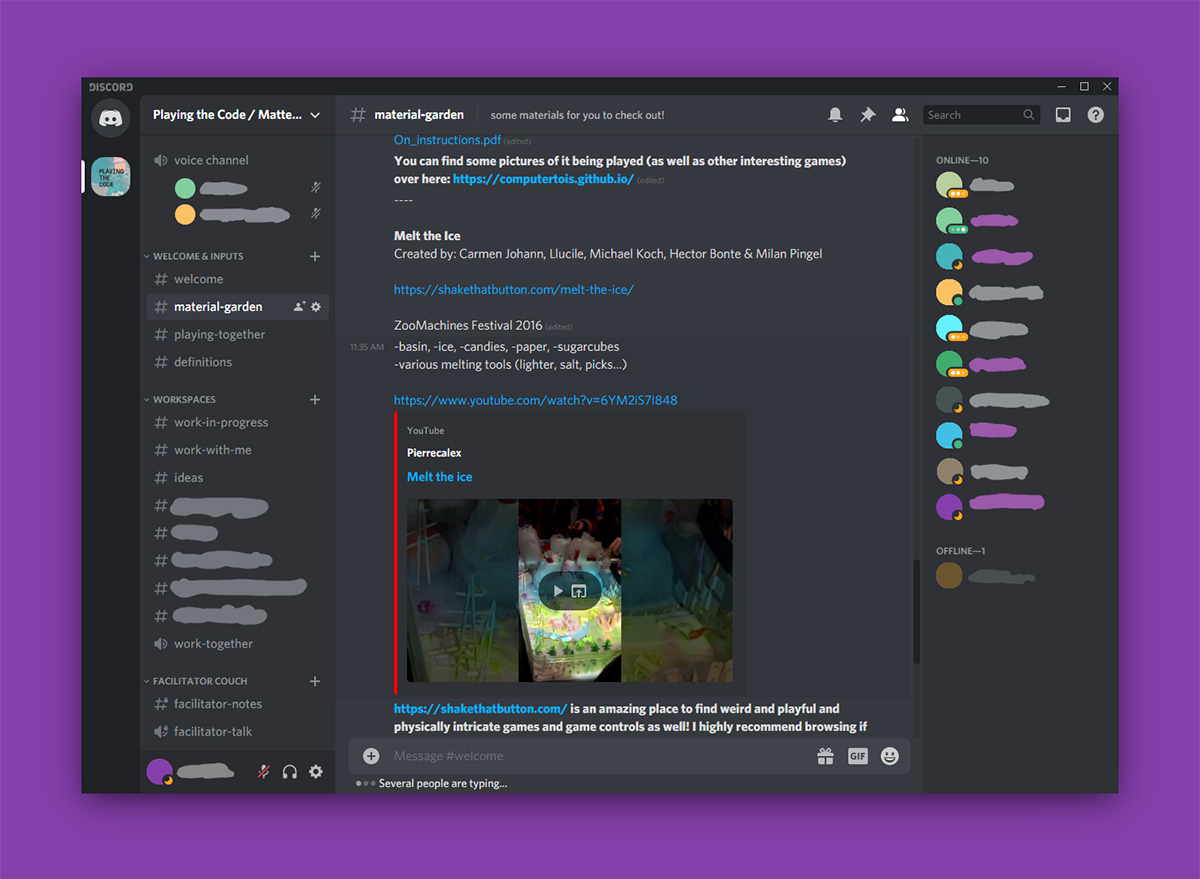 Here are some of the playful objects and games that were made during our jam:

"I enjoyed the communication in discord a lot while figuring out what I want to do with my really real materials - what took me at least 2/3 of the time. I was thinking a lot about non sense rules which lead one to "facts" - inspired by conspiracy theorists mixed with horoscopes and fortune telling machines. In the end I loved all the materials and managed to use a lot of them for a new way for you to find out your future - which will definitely happen." 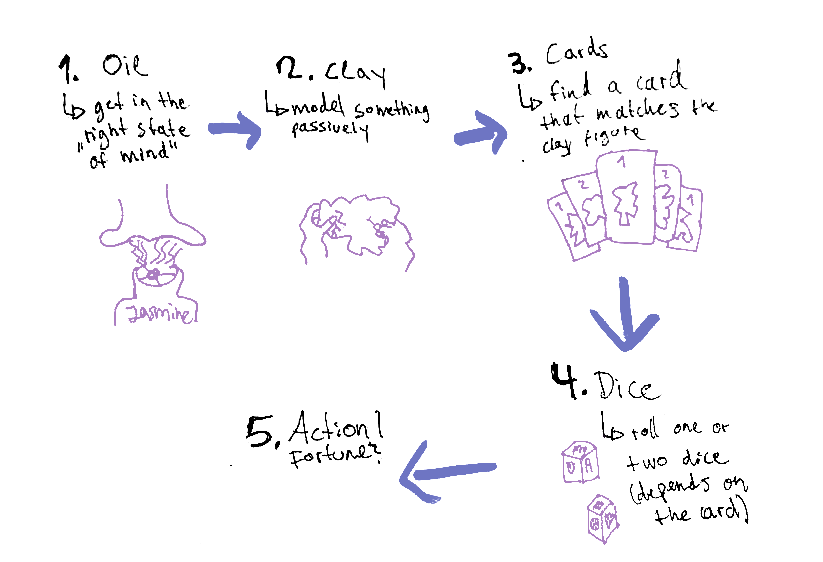 "While dice are designed to show each number in an equal probability, stones generate different likelihoods for landing on various sides depending on their size, weight and shape. I’m curious about the unruly, un-average, indeterminate logics of engaging stones as dice." 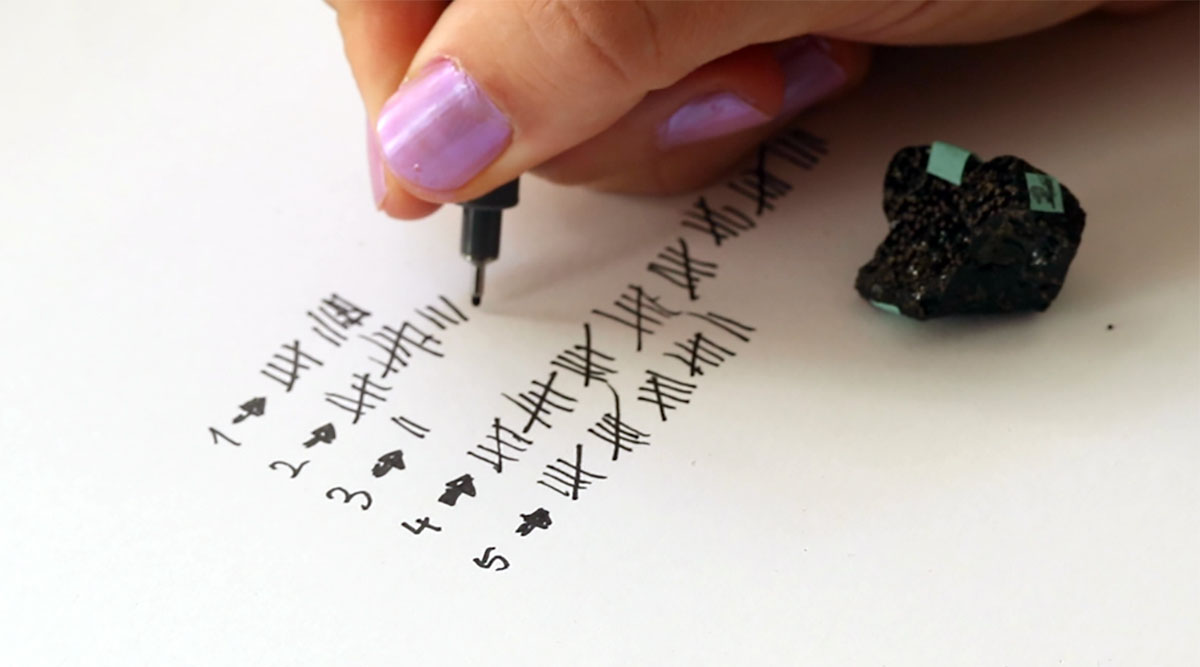 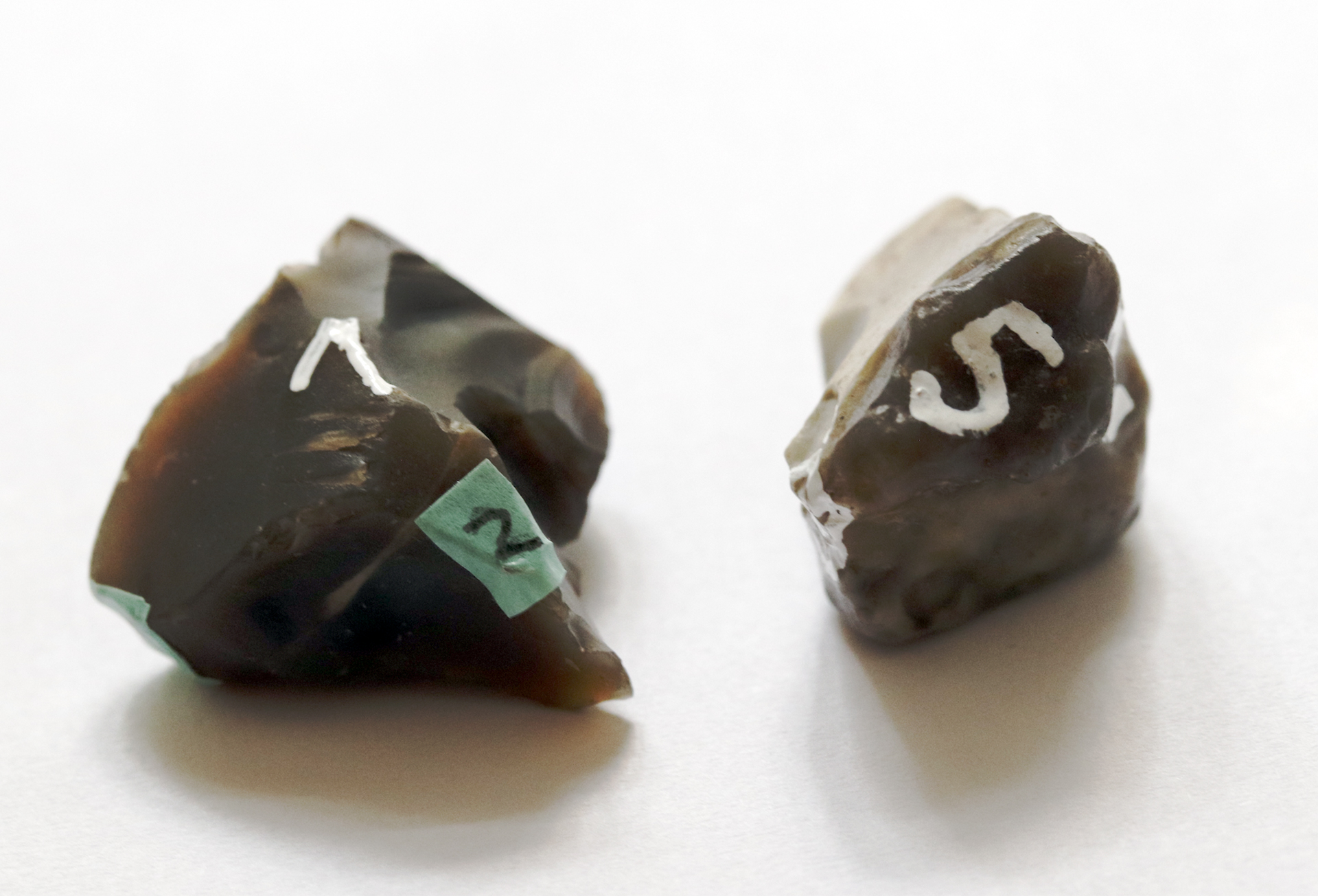 "Included with the gamejam materials was this spongey-moist modeling clay. While I played with it I realized it could conduct electricity. So I figured it would be interesting to use an Arduino and see how the resistance measured across the clay changes along with the clay's shape and thickness. I used this resistance value to drive a sound generator with varying pitch and timing." 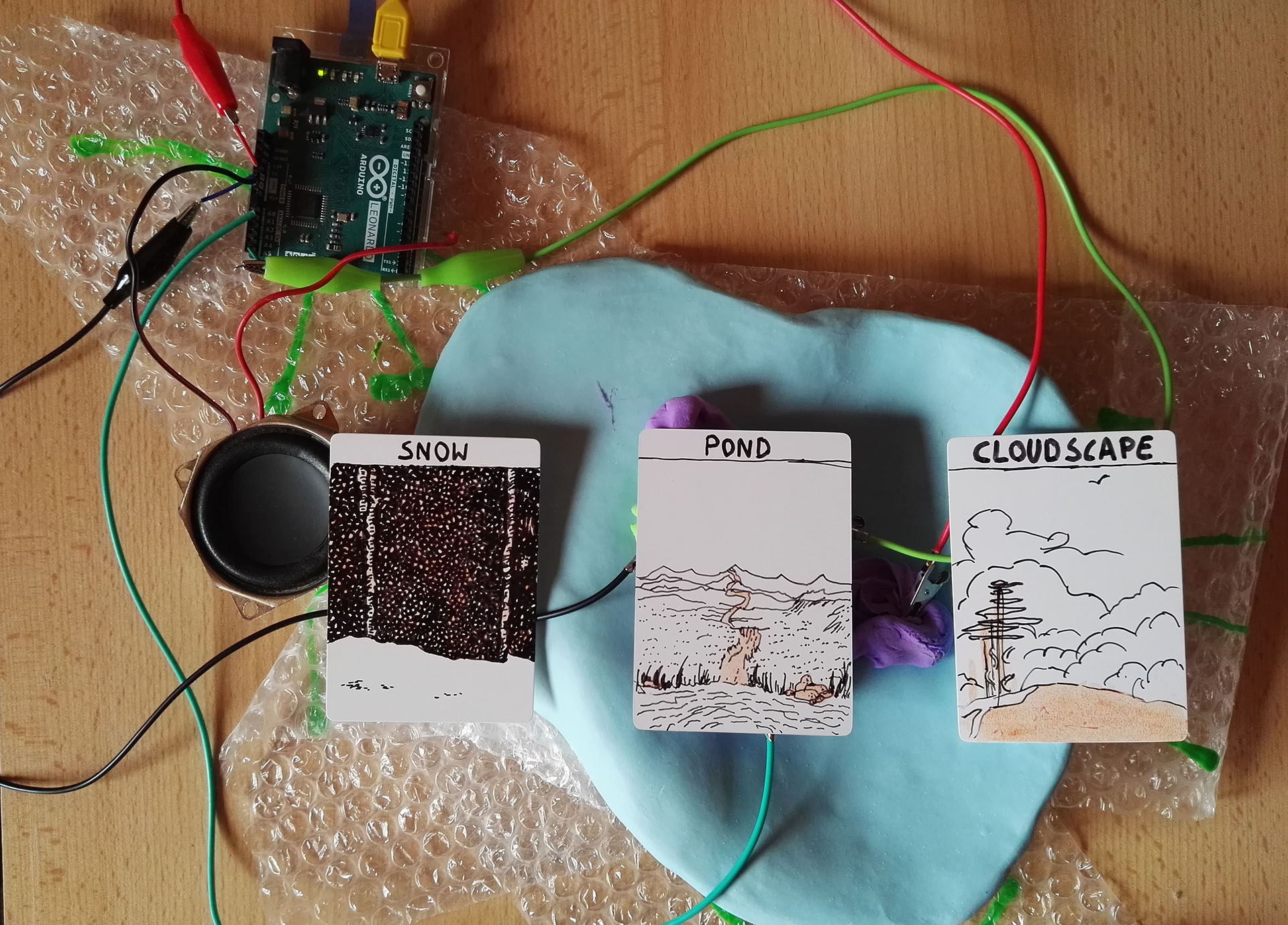 "Over the game jam I was slow and thought with the prompt: "Before you begin your walk, lay out the items you intend to take. Weigh each in your hand. Fully consider what it entails to carry this burden: not just the mass, but the meaning and the memory." I am interested in processes of reading that don't always lead towards knowing more, resolving something or 'shedding light' on things, so I made some experiments with this crystal considering "what it entails to carry this burden" by using the crystal as a way to look differently and break apart things on the pages that I was looking to for some inspiration. I read some bits of On Earth We're Briefly Gorgeous by Ocean Vuong as well as From a Broken Bottle Traces of Perfume Still Emanate by Nathaniel Mackey." 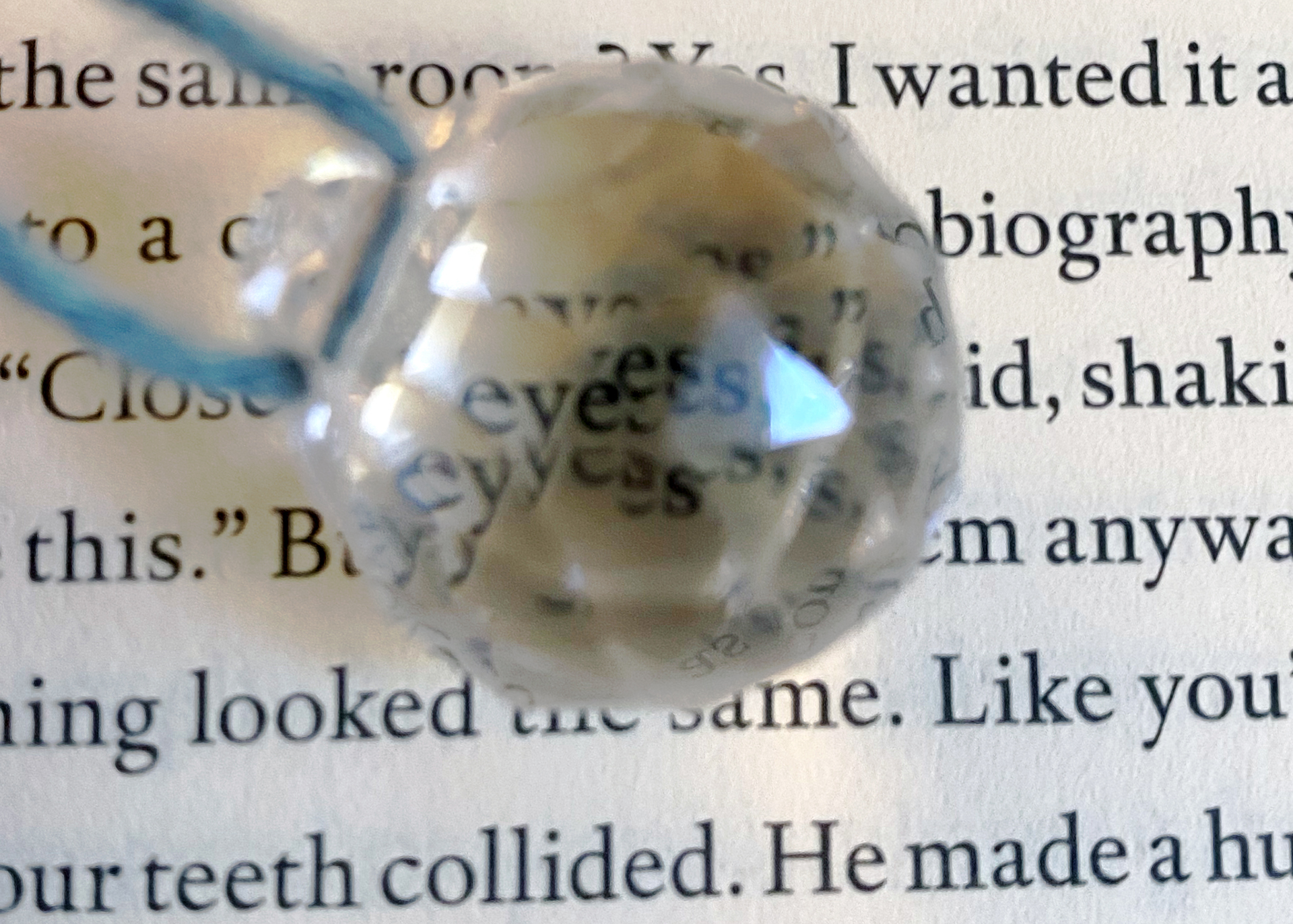 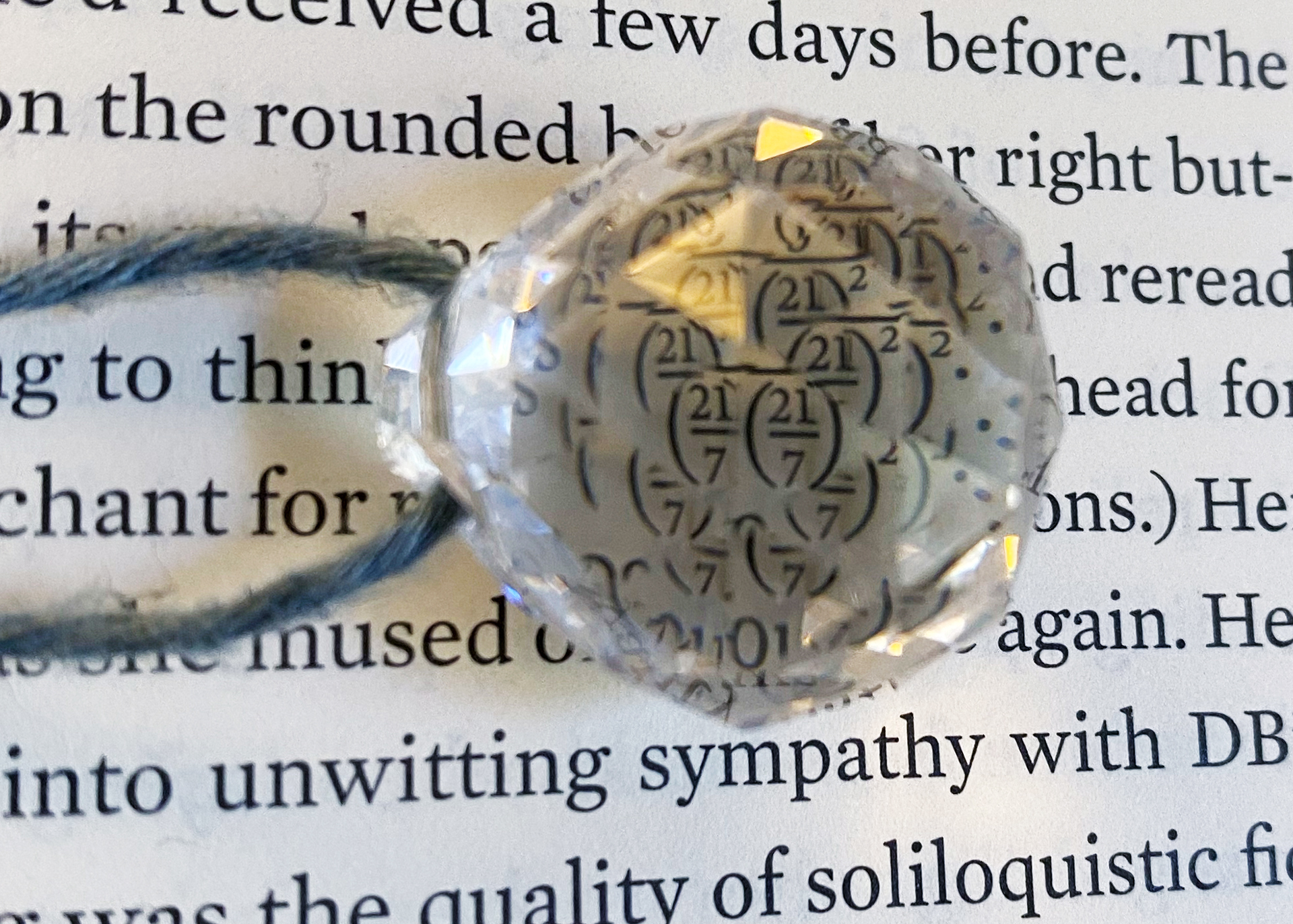 "nice explores playing with time, time-released artifacts or information, context/location/situation and touch and has some degree of non-controllability. The aim was to experience how experimenting with the materiality of the artefacts leads (or not leads) to a certain rule or even game mechanics. The play figures are captured in ice and are released depending on the temperature of the place where you play. The process can be accelerated through touch. The ice also makes the figures unrecognizable, so you wouldn't know which one you started out with." 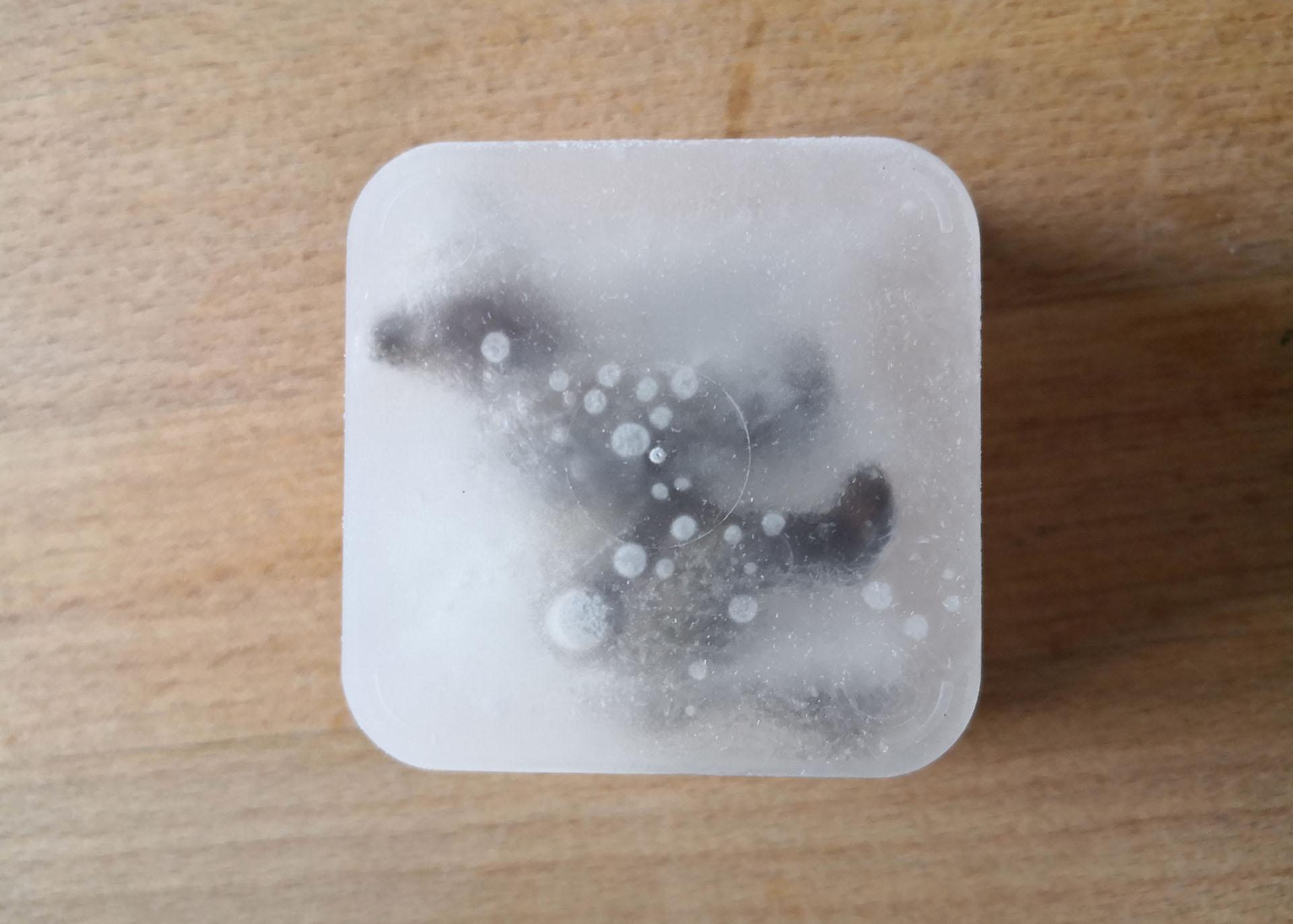 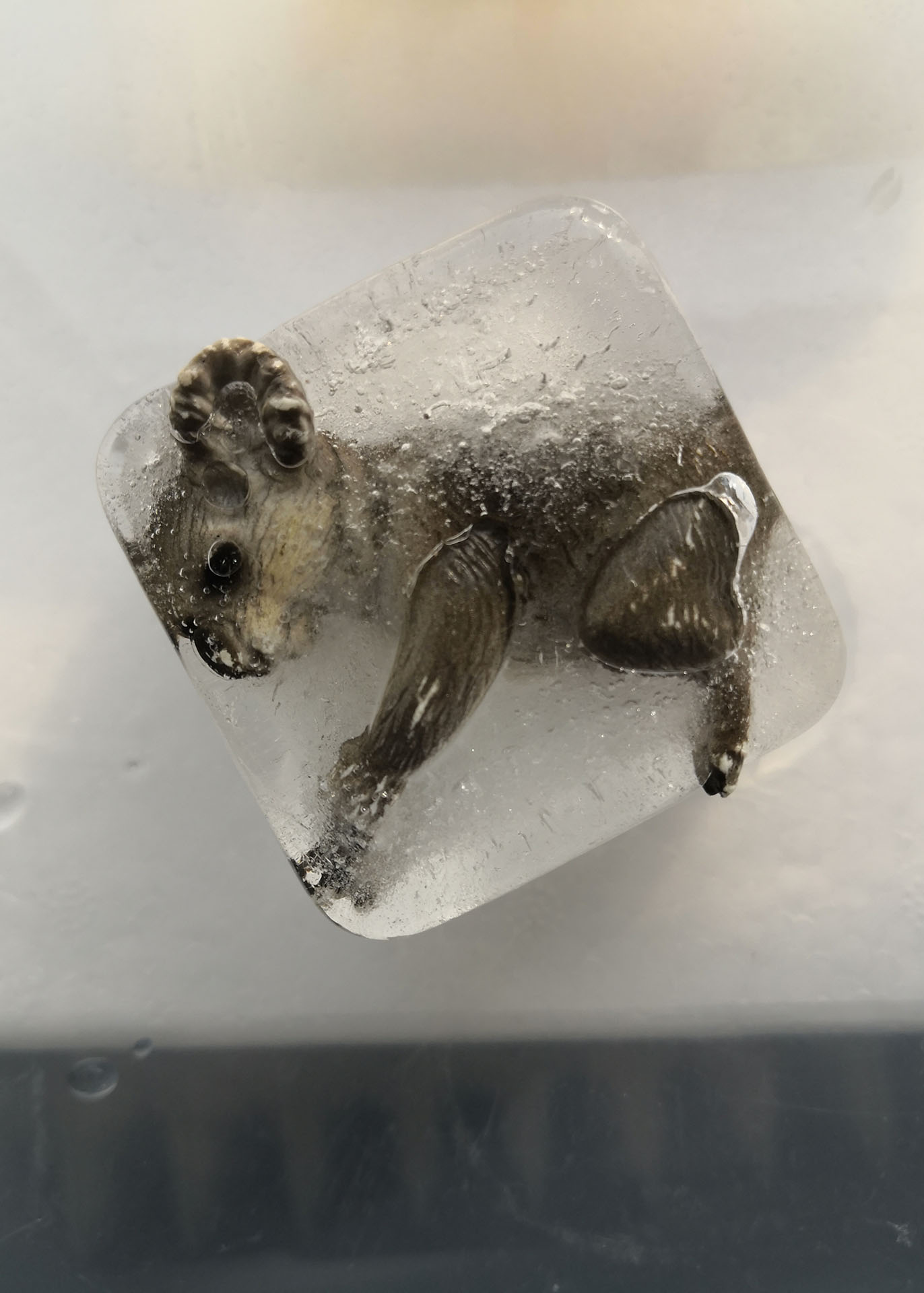